Yerba Mate vs Coffee? Which Is Better For You? 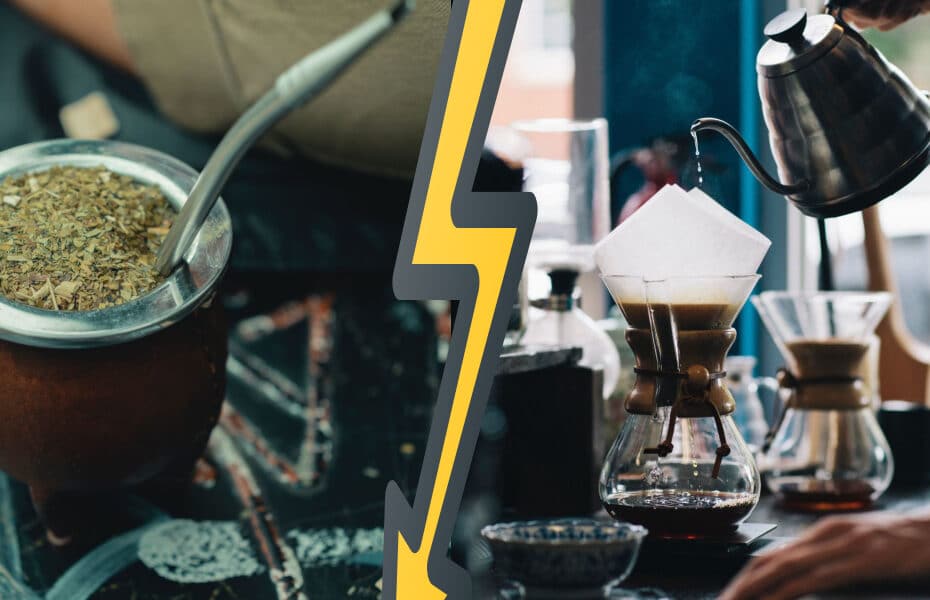 Although Yerba Mate and Coffee’s flavors and preparation methods are vastly different, they have more in common than you might imagine. These beverages provide health advantages such as minerals and antioxidants as well as the mood-boosting and focus-improving effects of caffeine.

What is the difference between Yerba Mate and Coffee? Which should you drink first thing in the morning? Continue reading for a more in-depth explanation!

What is Yerba Mate?

Yerba Mate is a herbal tea produced from the leaves of the shrub Ilex paraguariensis. The plant’s leaves and small twigs are harvested and preserved. To prepare Yerba Mate, steep the leaves in hot water, like you would any tea.

This one-of-a-kind tea has a distinct (some would say acquired) flavor. It is popular in South America, especially Argentina, where many people drink it every day from a gourd-shaped cup with a metal straw.

What are the health benefits of Yerba Mate?

1. Rich in antioxidants and nutrients

Yerba Mate includes a variety of important plant components, including:

Xanthines: These compounds are stimulants. Caffeine and theobromine, also found in tea, coffee, and chocolate, are among them.

Caffeoyl derivatives: These are the key antioxidants in tea that promote health.

Saponins: These are bitter chemicals with anti-inflammatory and cholesterol-lowering effects.

Polyphenols: Polyphenols are a vast category of antioxidants associated with a lower risk of numerous diseases. Surprisingly, Yerba Mate tea appears to have slightly stronger antioxidant potential than green tea. Furthermore, Yerba Mate may include seven of the nine essential amino acids, as well as practically every vitamin and mineral your body requires.

However, because the tea contains just trace levels of these nutrients, it is unlikely to make a significant contribution to your diet on its own. Yerba Mate is a high-antioxidant herb that provides a variety of useful plant elements.

Yerba Mate has 85mg of caffeine per cup, which is less than coffee but more than a cup of tea. As a result, it may raise your energy levels and help you feel less weary, just like any other caffeinated meal or beverage.

Caffeine can also influence the levels of certain signaling molecules in your brain, which makes it very good for mental focus.

Several human investigations found that subjects who ingested a single dose of caffeine with 37.5–450 mg had enhanced alertness, short-term recollection, and reaction time. Furthermore, folks who regularly use Yerba Mate frequently talk about how it boosts alertness like coffee — but without the jittery negative effects. These testimonials, however, have yet to be scientifically confirmed.

Caffeine has also been shown to increase muscle contractions, reduce fatigue, and boost athletic performance by 5%. Those who use Yerba Mate should expect similar physical performance benefits because it contains a moderate level of caffeine.

According to one study, those who took a single 1-gram capsule of ground Yerba Mate leaves shortly before exercise burnt 24 percent more fat during moderate-intensity activity.

Higher dependence on fat for sustenance during exercise conserves carbohydrate reserves for high-intensity times like riding up a hill or sprinting to the finish line. This could lead to improved athletic performance.

It is still unknown how much Yerba Mate to drink before exercising.

During exercise, Yerba mate increases your body’s dependence on fat for fuel. It may also increase muscular contractions and reduce fatigue, which may all contribute to improved physical performance.

4. May protect against infections

Yerba Mate may aid in the prevention of infections caused by parasites, bacteria, and fungi.

According to one test-tube study, a high dose of Yerba Mate extract killed E. coli, a bacteria that causes food poisoning symptoms like stomach cramps and diarrhea.

Yerba mate compounds may also inhibit the formation of Malassezia furfur, a fungus that causes scaly skin, dandruff, and some skin rashes.

Finally, research indicates that the chemicals in it may offer some protection against intestinal parasites.

Nonetheless, the majority of these experiments were conducted on isolated cells. It is still unknown whether these benefits apply to humans; more research is required.

Yerba Mate has antibacterial, antiparasitic, and antifungal effects. More research, however, is required.

5. May help you lose weight and belly fat

In animal experiments, Yerba mate has been shown to lower hunger and enhance metabolism, aiding in weight loss. It appears to reduce the total number of fat cells and the amount of fat they hold. According to human research, it can also increase the amount of stored fat burned for energy.

Furthermore, in a 12-week study of overweight persons, those given 3 grams of Yerba Mate powder each day dropped 1.5 pounds on average (0.7 kg). They also reduced their waist-to-hip ratio by 2%, indicating that they had lost belly fat.

Over the same 12-week period, those receiving a placebo gained an average of 6.2 pounds (2.8 kg) and increased their waist-to-hip ratio by 1%.

Yerba Mate has been shown to suppress hunger, enhance metabolism, and increase the amount of fat burned for fuel. This could assist you in losing weight.

6. It could boost your immune system

Saponins, which are natural chemicals with anti-inflammatory qualities, are found in Yerba Mate.

It also contains trace levels of vitamin C, vitamin E, selenium, and zinc. These antioxidants can help to boost your immune system and improve your overall health.

However, no studies on the direct effects of Yerba Mate on the human immune system have been conducted.

Anti-inflammatory and antioxidant qualities of Yerba Mate may help your immune system.

In fact, according to recent animal research, it may boost insulin signaling.

It may also lower the generation of advanced glycation end products (AGEs), which play a role in the genesis and progression of many diseases.

However, human research is currently lacking.

Yerba Mate has been shown to improve insulin signaling and blood sugar control. More human research, however, is required.

8. It may reduce your risk of heart disease.

Participants in a 40-day research, who drank 11 ounces (330 ml) of Yerba Mate daily, reduced their “bad” LDL cholesterol levels by 8.6–13.1 percent. However, further research is required before conclusive conclusions may be drawn. The antioxidant, anti-inflammatory, and cholesterol-lowering qualities of Yerba Mate may help prevent heart disease.

Traditionally, Yerba Mate is served in a gourd, sometimes known as a calabash.

It’s usually drunk via a metal straw, with a filter on the bottom to strain the leaf fragments away. Fill the bottom third of the calabash with dried or toasted Mate leaves before adding hot water to make Mate. If you don’t have a calabash, make it in a French press.

The tea is frequently served with lemon juice, burnt sugar or milk and can be topped off with hot water numerous times before making a new batch with fresh leaves. Although Yerba Mate is generally drunk hot, it can also be served cold, especially in warmer climes.

The safety and side effects of Yerba Mate

Healthy individuals who drink Yerba Mate once in a while are unlikely to be harmed. Those that consume it regularly, on the other hand, may be at a higher risk of the following:

Research shows that consuming huge amounts of Yerba Mate over an extended period may increase your risk of upper respiratory and digestive tract cancers. One possibility is that Mate includes polycyclic aromatic hydrocarbons (PAHs), recognized carcinogens present in tobacco smoke and cooked meat. It is also frequently consumed at extremely high temperatures. This may cause damage to the lining of your respiratory and digestive tracts, raising your chance of malignant cell growth. However, some of its constituents may offer protection against other types of cancer.

Caffeine is present in Yerba Mate. Caffeine overdose can induce headaches, migraines, and elevated blood pressure in certain people. Pregnant women should limit their Mate consumption to no more than three cups per day. Caffeine consumption may raise your chances of miscarriage and low birth weight.

Certain chemicals in Yerba Mate have been shown in studies to have monoamine oxidase inhibitor (MAOI) action. MAOIs are frequently given as antidepressants and Parkinson’s disease treatments. As a result, anyone using MAOI medicines should consume Yerba Mate with caution.

Finally, because it contains caffeine, it may interact with the muscle relaxant Zanaflex or the antidepressant Luvox. Individuals using these medicines should avoid Yerba Mate, as it can intensify their effects.

When is Yerba Mate not recommended?

According to Carolina Fuentes, a naturopath at Natural Clinic, it is not advisable to take Yerba Mate after 8 p.m. since the diuretic impact may interfere with sleep (1). Tea Yerba Mate is also not suggested for persons with gastrointestinal problems because it has a laxative impact and can aggravate pain. Medical advice does not recommend it for youngsters under the age of eight due to its stimulating impact.

Coffee, discovered around the 6th century by Abyssinian/Ethiopian shepherds, is possibly the most widely consumed stimulating beverage in the United States and Europe.

Its capacity to temporarily improve brain and muscle activity has made it extremely popular as the “go-to” drink, powering the worldwide corporate system.

Coffee safety and side effects

When should you avoid drinking coffee?

It is not recommended to take it in big amounts because it might cause sleeplessness and mental weariness; after all, it changes the chemistry of the brain. When consumed on an empty stomach, the formation of acids is activated, causing modest discomfort in the short term but severe long-term consequences.

Unless you live in Argentina, Yerba Mate may be a little more difficult to come by. But if you have a regular supply of leaves and twigs, Yerba Mate is quite simple to prepare — just like any other cup of loose leaf tea!

Remember that Yerba Mate has a strong bitter flavor, similar to espresso rather than normal brewed coffee. Many individuals, like coffee, dislike the flavor the first time they experience it. However, there is a good probability that you will develop a liking for either drink.

Coffee is much more widely available worldwide, and there are numerous brewing techniques to select from. Choose between a high-end Italian espresso machine and a low-cost AeroPress to fit any budget. Drinking coffee also allows you to experiment with different bean origins, roast levels, and interesting toppings.

So, is Yerba Mate healthier for you than Coffee?

Each beverage has its distinct flavor and aroma. It is up to you to decide which one is best for your well-being and health. We prefer to follow the findings of the scientific studies listed, and we urge that you drink Mate tea. Its contraindications are less stunning than those of the other drinks, but the benefits to our bodies and growth are greater.

Mate users recognize and confirm the good changes they have experienced since adopting the beverage as a habit: energy, peace, tranquillity, balance, and vitality. If you are still skeptical about one of the world’s most populous drinks, we recommend that you read the five reasons why you should incorporate Yerba Mate in your diet.

Which is better: Yerba Mate or Coffee?

What’s the bottom line? If you enjoy tea and want to try a new herbal drink, Yerba Mate may be for you. On the other hand, coffee may be your best option if you want a more approachable drink that allows you to experiment. What is our recommendation? Before you make your decision, order a Yerba Mate and a cup of coffee from a coffee shop. You might be surprised by which drink you prefer – and you won’t have spent much money. We hope you enjoy your caffeinated beverage, no matter what you choose!

If you click on the Amazon link or Add to Cart and make a purchase, we earn a commission at no additional cost to you. Last Update: 2022-08-10