As an espresso fan or coffee connoisseur, you should be aware that there is a wide range of automatic espresso machines available, so you will have a lot of options when looking for one.

Both brands have ardent fans who would never use anything else, but choosing between Jura and Saeco is not always easy for everyone, as many coffee connoisseurs will be perplexed.

However, the good news is that we are here to assist you in deciding between Jura and Saeco by offering further information and demonstrating how they compare.

Although the company’s mission and origins aren’t always indicative of the quality of the goods you’ll receive, they can give you an idea of what to expect. Both Jura and Saeco have been making coffee makers for decades, and one is a Swiss masterpiece and the other is an Italian gem.

Jura is a Swiss home appliance manufacturer and distributor best known for its fully automatic espresso machines, which make for a significant portion of the company’s revenue. The company was founded in 1931 by Leo Henzirohs, and while it used to make its own products, it outsourced production in the 1990s to boost efficiency and lower costs.

Jura has earned a reputation for producing high-quality coffee makers that are built to last a lifetime, but its machines are not only more expensive than those offered by Saeco, but also most other rival brands.

Arthur Schmed and Sergio Zappella founded the Italian business Saeco in 1981. It specializes in super-automatic espresso machines, such as Jura, but it also offers a capsule-based espresso machine line and other home appliances, such as irons and toasters.

Although they make high-quality equipment in the same way as Jura does, their products are more inexpensive. Philips, an electronics giant with a global footprint, presently owns the brand.

The entry-level Jura models, such as the A and ENA Micro lines, make 3 to 6 coffee drinks in two strengths. Models in the middle range can make 7 to 16 drinks. It also increases the programmable coffee strength, which can be adjusted from 4 to 8 levels. The Jura Impressa C, D, and E lines are examples.

The premium coffee makers can prepare up to 28 different drinks. There are five to ten levels of coffee intensity. The Jura Impressa S, Z, and Giga lines are the models in consideration. Most Jura coffee makers have a dual spout, allowing you to brew two cups of coffee at the same time. A 15-bar pressure pump is also included.

Saeco’s entry-level machines, such as the Vapore XSmall, can make three different varieties of coffee. Up to 7 different coffee drinks are available in mid-range models. This includes the Intelia Deluxe and Incanto. It also has a smart strength selection feature that allows you to choose from up to 5 different levels. Users can save their desired coffee strength using the Memo Function, and the machine will remember it.

The premium models can make 11 to 15 different sorts of beverages. The Saeco PicoBaristo and Xelsis are examples of this. A dual spout is included on all models, allowing you to prepare two cups at the same time. There’s also a 15-bar pressure pump. The LatteDuo feature on the higher-end models allows you to make double portions of milk-based beverages.

Despite the fact that both brands produce powerful automatic espresso machines, Jura comes out on top in this round. Because Jura’s mid-range models are equally priced to Saeco’s mid-and high-end versions, this is the case. Despite this, Jura offers a greater variety of cocktails, ranging from 7 to 28. This is nearly double the 4 to 15 possibilities offered by Saeco.

Now that you have a basic understanding of the two items, let’s look at the features that distinguish them, starting with the grinders, since both types of coffee makers include built-in coffee bean grinders.

Both Jura and Saeco use more efficient conical burr grinders in their coffee makers, particularly in their popular automatic espresso machines.

The difference between the two is that Jura’s machines employ stainless steel conical burr grinders, whereas Saeco’s use ceramic ones. Saeco outperforms Jura in this category because ceramic grinders do not emit as much heat like stainless steel grinders and do not easily dull.

Boilers are the devices that transport heat from the heating element to the brewing head, allowing you to brew espresso or froth milk. The boiler can be single or double in most machines, however leading brands like Jura and Saeco also use other technologies to improve the performance of the boilers.

Saeco uses a single boiler for its entry-level models, such as the Minuto Pure, but for their more expensive models, the business will use more efficient Rapid Steam technology and twin boilers.

Jura, on the other hand, will provide a single boiler on smaller versions like the Micro 1, which does not require twin boilers because it lacks a milk frother.

However, most of their other models, notably the high-end Saeco models, feature Rapid Steam technology and double boilers.

A milk frother is essential for creating cappuccinos and other espresso-based milk beverages, therefore an automatic espresso machine is never complete without one. Frothers will be included in both Jura and Saeco machines.

The Fine Foam technology, which is an integrated automatic frothing mechanism that consistently creates thicker and creamier foam, will be used by the majority of Jura machines. Depending on the model, Saeco offers both the manual Panarello wand and the motorized one-touch frothing technology.

Because Jura and Saeco are premium brands, they will provide more customizable options and allow you to select from a wider variety of beverage alternatives while using most of their machines.

However, with both manufacturers, the display and user interface that lets you browse through the various settings is determined by the machine’s pricing point.

The entry-level devices from Saeco will typically include backlit LCD buttons or a selection wheel, whilst the higher-end ones will have digital displays and interfaces.

The situation is similar for Jura, as their entry-level coffee makers have button-based or rotary-switch controls, whereas the mid and high-end versions have a more intuitive digital display and full-color touchscreen for the more expensive models.

You need some guarantees that whatever coffee maker you choose will look well in your kitchen before you finalize your decision. The good news is that both Jura and Saeco coffee machines have a very nice high-end design to them that distinguishes them from other brands.

Jura coffee machines, on the other hand, will have a sleek, professional appearance accentuated by sharp angles and lines, and they will generally appear pricey given the high-quality materials used to build them.

Saeco coffee machines aren’t far behind, and probably their most distinguishing feature is their small and compact form. They do, however, have some excellent rounded angles that are accented by gentle lines.

Capacity of the water tank

Both machines have varied tank filling capabilities and forms to match their designs and brewing capacities. A coffee machine’s water tank and hopper are fascinating components.

Essentially, they exist to make your life easier. This category may appeal to some people while being unneeded to others, depending on whether you need greater convenience.

Depending on how much coffee you consume, you may fill up the either water tank and know that it will last for a day or two. The water tank of the Saeco Xelsis is really lighted with an LED, which is a unique feature. It’s quite cool to look at.

Capacity of the bean hopper

Those who are tired of grinding their beans on a daily basis and want a place to store them for a few days will appreciate the Saeco Xelsis’s substantially greater hopper capacity.

While the Saeco Xelsis and the Jura S8 both require power to operate, they are both energy-efficient. Both devices run on 120 volts, which is a very common voltage. The fact that both have negligible standby power is a plus. This implies they won’t use too much power when they’re not in use. This is a reassuring feature because every little bit helps with your electricity bill.

Unless you enjoy dragging your coffee maker out of the closet every time you want a cup of joe, you’ll want to keep your coffee-making supplies close to reaching. With this in mind, it might be worth it to invest a little extra money on a machine with more space-saving built-in tools like grinders and milk frothers.

If you only drink one cup at a time, a machine with a limited capacity won’t be an issue. If you don’t want to have to refill the machine’s water reservoir too often or want to make two cups at once, a machine with a 64-ounce tank, such as the Jura Impressa, is a good choice. 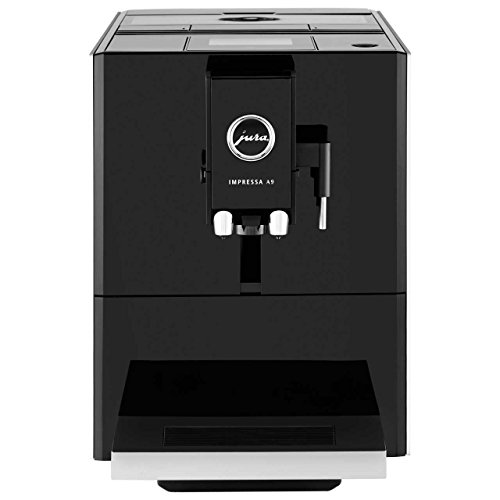 When it comes to price, there is no rivalry between the two companies because they are on opposite sides of the spectrum, with Jura being more expensive and Saeco being more affordable.

An entry-level Jura espresso machine, such as the Micro 1, will set you back at least $1,100, which is roughly double the price of Saeco’s entry-level model, the X-Small, which would set you back between $500 and $600.

The Saeco Xelsis and the Jura S8 both come with a two-year warranty. This is a reasonable timeline, but because the machines have many moving components, inspect them before the two-year mark. The main difference is that the Seco Xelsis comes with a five-year warranty on the brew head, which is a welcome feature.

Impact on the environment

Which is the better option?

Regardless of whether you buy Jura or Saeco, you will be able to prepare some wonderful brews because both companies offer some fantastic coffee machines on the market. Both will provide entry-level and high-end models to appeal to a wide range of customers. When deciding between the two, though, you must find the proper balance between features, build quality, and machine cost.

Saeco coffee makers will be substantially less expensive than Jura coffee makers, making them an excellent alternative for budget customers. However, it’s crucial to keep in mind that the lower price and lower maintenance costs mean you’ll have to forego things like high-quality construction, a more user-friendly interface, and a slew of other great features that Jura machines offer.

As a result, if cost isn’t an issue for you, Jura is the superior brand for you because it has a lot more to offer. In a different light, Saeco is a suitable choice for novices purchasing their first espresso machine, whilst Jura is the brand of choice for seasoned coffee consumers and professional baristas.

If you click on the Amazon link or Add to Cart and make a purchase, we earn a commission at no additional cost to you. Last Update: 2022-05-04