Coffee Before Bed: Is It Okay to Drink Coffee at Night? 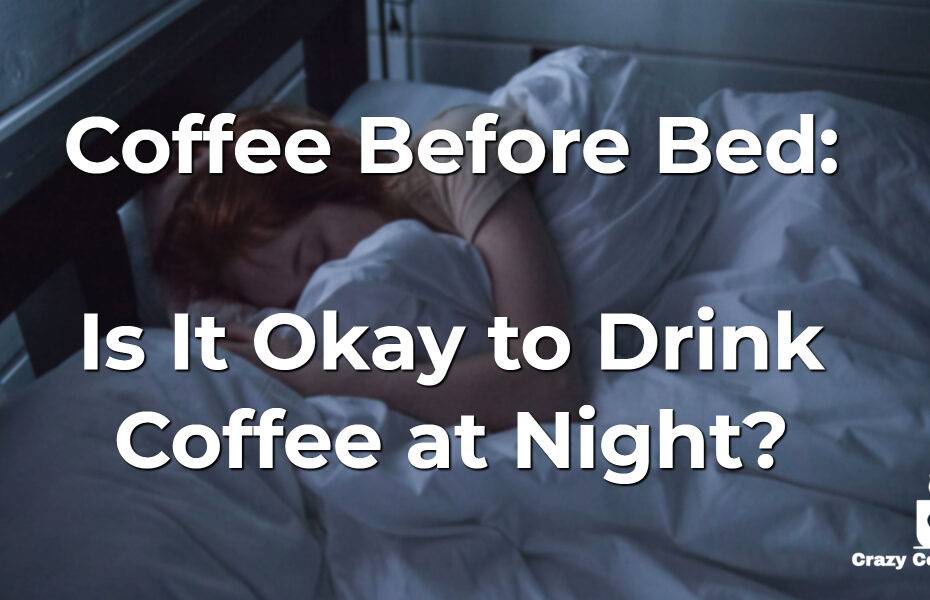 With this increasing pace of the world, we have also started pushing ourselves to be better. More productive and achieve more than before. People engage in ways to work longer by pushing themselves to stay awake, alert, and active just so they can get more work done. For this, many people have chosen their daily dose of energizer as Caffeine. And they take it mostly as coffee.

In fact, it is seen as a daily need for many hard-working individuals running in the corporate race. May it be for late-night software engineers who are trying finishing a project before the deadline, lawyers preparing for a case filing through boxes of paper, or students preparing all night for a test, we can see this through TV shows and pop culture references all around us that caffeine is their go-to poison to fill them up with energy and push through. It is for those individuals who want more out of their lives.

It does have its benefits

This love for coffee is not only among grassroots people but also seen from the scientific community as well. We have found various benefits from the consumption of caffeine. For example, Caffeine was seen as a protective factor in dementia and Alzheimer’s disease

It increases your metabolic rate by 3-11%, thereby helping people who want to lose weight much more easily by consuming caffeine. We even have studies which show that coffee can reduce the risk of Parkinson’s. All of these benefits cause us to take in more coffee and become healthier.

With so many benefits and such a warm love towards coffee, one should ask oneself,

“Should I drink coffee before bed?” The answer might be an obvious one, “No”. Only those who truly crave coffee will fight against this “nonsense” 😉

Why do I crave coffee at night?

People wanting coffee in general are also poor in catecholamines (hormones produced by the adrenal glands, including dopamine, epinephrine-adrenaline and norepinephrine). Since coffee activates these hormones, your adrenal glands tell your body they need more, which makes you want coffee. This can happen any time of the day, even at night.

What happens if you drink coffee before sleeping?

How long before bed can I have coffee? A study showed that the internal body temperature can increase 2 hours after caffeine consumption. And even 6 hours before bedtime can diminish the quality of sleep.

“Thus, the present results suggest the common practice of afternoon consumption of caffeine should at a minimum be restricted to before 17:00, particularly with regard to the moderate-large doses of caffeine commonly found in increasingly popular premium coffees and energy drinks.“
​- Dr. Christopher Drake, Dr. Timothy Roehrs, John Shambroom, and Dr. Thomas Roth

A different study conducted by Sleep Disorders & Research Center, Henry Ford Hospital, and Department of Psychiatry and Behavioral Neurosciences, Wayne State College of Medicine, which concluded that people who had taken in caffeine six hours before they slept had significant disruption on their sleep and suggested that in order for better sleep hygiene one should refrain from substantial caffeine consumption at least six hours before bedtime.

In short, If you want a good night sleep, you should not drink caffeine six hours before you sleep. But, if you continue consuming a large amount of caffeine than you shall disrupt your sleep.

READ Related Article:  What Is Gourmet Coffee – How Is It Different?

Like many other psychoactive substances which are harmful to you, Caffeine is prone to addiction. The brain cells triggered during the consumption of caffeine is similar to that of cocaine and amphetamines. Drugs which are known to be lethally addictive.

That is to say, slowly but surely, more people who consume caffeine are likely to be addictive to it. And what was once a morning consumption to keep you active throughout the day does not give the same dose of energy unless you start chugging more caffeine various times throughout the day. This result in a bad dependency on caffeine.

Starting the day out with coffee might be a good way to energize yourself but as you become addicted to the substance you might find that a cup of coffee might not be enough to give you the same energy and alertness as you proceed further.

It was seen that the people who were daily consumers of caffeine consumed abstained from intaking it, they showed signs of withdrawal. The major changes that were seen in the participants were that they were fatigued, had low alertness, disturbance in mood lack of motivation, nausea, flu-like feelings, and headaches. So, when you stop drinking, you don’t get that energy.

As it also turns out, ingesting caffeine during the day is actually pretty bad if you can’t sleep at night. Your body is made up of cells, each with their own circadian rhythm. The gears are humming along, and as the sun goes down they start to shift to prepare the body for rest.

So it does make you sleepy!Not really, it just disrupts your body’s natural sleep pattern.

If we don’t drink, then we don’t get the energy and alertness. So, the solution to the problem should be to always continue on drinking, right? Sadly, again the answer is, “No”.

Caffeine is a great way to start the day.

The same cup does not make us feel highly energized as we used to. Then we start chugging more to feel the same. This slowly comes close to our sleeping time and the aftereffect of consumption does not let us sleep. Lack of sleep causes various problems including you being out of energy the next morning. You don’t feel as if you have rested fully. You need something to give you the zeal to carry on throughout the day and you take another cup of coffee and the cycle repeats itself.

Best way to fix the problem

The best way to tackle this problem is to not cut out caffeine itself but to regulate its consumption. Caffeine, despite its flaws, has its benefits as well. It gives you energy, makes you alert, and prevents various types of diseases.

Also, a fresh cup tastes good in the morning. The best way to go about it is to drink it early in the morning and have no more than 4 cups of it in a day. (It is best not to have any coffee six hours before your bedtime. You will sleep better and you shall have a better day tomorrow. And that too with only one cup of coffee.

I am off to bed now. I know I will sleep like a baby. I haven’t had a cup of coffee from 2 in the noon. Maybe I will have one tomorrow morning.