Are Tea and Coffee Safe? 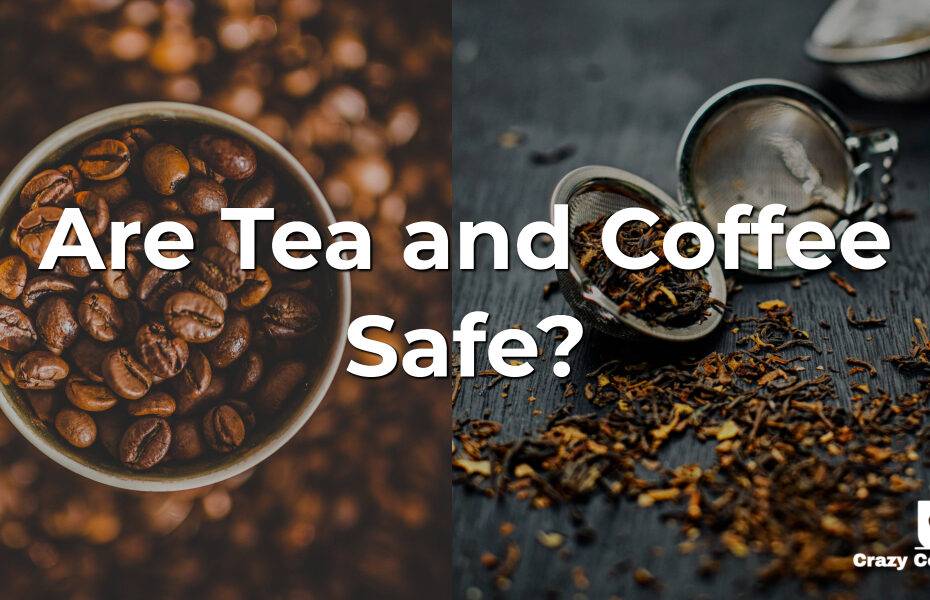 An Exploration of the Rumors Plaguing the World’s Favorite Beverages

With more warnings being issued every day – warnings about some of the Western world’s most ubiquitous foods and beverages – it causes one to wonder: what about coffee and tea? With all the rumors swirling about the dangers of caffeine, possible dehydration and mineral-leaching, and even an increased risk of disease, are these beloved beverages safe for everyday consumption?

Some experts believe that coffee is not only not harmful, it is actually helpful.

According to Sid Kirchheimer’s WebMD article Coffee: The New Health Food?, reviewed by Dr. Michael W. Smith, several recent studies indicate that coffee may help reduce the risk of type 2 diabetes. According to Kirchheimer, these studies include a Harvard study that observed thousands of people, some of them for almost twenty years. Kirchheimer states that, according to that particular study, drinking half a dozen cups of coffee every day can cut one’s risk of developing the disease by up to half. The risk of Parkinson’s disease is also thought to be reduced by regular coffee drinking, or more specifically, by the caffeine in the coffee.

And the alarmist reports about coffee causing or encouraging heart disease may be creating unnecessary concern. According to Jane Brody’s article Sorting Out Coffee’s Contradictions, 10 studies have shown no increase in the occurrence of heart disease among regular coffee drinkers. Brody points out that rumors about hypertension and even cancer also appear to be untrue, citing last report on coffee published by the Center for Science in the Public Interest. And like Kirchheimer, Brody points out that, either because of coffee’s antioxidant properties or its caffeine content, it is thought to reduce diseases like Parkinson’s and type 2 diabetes.

Rumors about tea being dehydrating or liable to leach iron from the body are discussed in the BBC News article Tea ‘Healthier’ Drink than Water. The article cites the European Journal of Clinical Nutrition, and states that the idea that tea dehydrates the body is untrue. Tea not only hydrates, but it also contains flavonoids, which may promote good health on several fronts.

Flavonoids (sometimes called bioflavonoids) are basically organic plant-derived compounds that are supposed to have great antioxidant capabilities. According to Tea ‘Healthier’ than Water, these antioxidants may help prevent cell damage, which may go so far as to help reduce one’s risk of cancer, although more studies must be performed before this link can be made definitively. Flavonoids may also be the reason why drinking at least three cups of tea each day may reduce one’s risk of heart attack.

Dr. Joseph Pizzorno addresses the tea/heart attack link in his article Cow’s Milk Counteracts Tea’s Cardioprotective Effects. In it, he explains that one study published in the European Heart Journal showed a link between black tea and flow-mediated dilation. Improved flow-mediated dilation is thought to reduce the risk of having a heart attack, and this study showed that the black tea improved the flow-mediated dilation of the women being monitored, until cow’s milk was added to the tea, at which point those positive effects ceased. Pizzorno recommends adding goat’s milk or soy milk to tea instead, which have not been shown to alter the positive effect that tea can have on the heart.

BBC News also has a tea tip: don’t drink it at meal times. Apparently tea may make it more difficult for the body to absorb iron, so the body should be allowed to properly digest food’s nutrients before that food is chased with a nice, hot cup.

So are Tea and Coffee Actually Healthy?

Are tea and coffee safe? Yes and yes. Can they even present benefits to one’s health? Many recent studies say they can. Of course, the amount of caffeine in tea and coffee (particularly coffee) can have unpleasant side-effects, including increased levels of anxiety. But healthy adults (especially those who are Dunkin’ Donuts devotees) will be happy to hear that they probably will not be harmed by their favorite drink . . . and might even be helped.